The World is in the Midst of a Helium Shortage

The World is in the Midst of a Helium Shortage

Imperial Helium is securing helium to meet the growing supply crisis for this irreplaceable commodity.

“Semiconductors….. Helium, a gas critical to their manufacturing, is experiencing a supply squeeze that can’t be remedied without new exploration and development.” 1) 21-05-13

“Helium Supplies Endangered, Threatening Science And Technology.
In America, helium is running out of gas….supplies are expected to be depleted there within the next eight years.” 2) 08-01-08

“The worldwide helium shortage affects everything from MRIs to rockets.” 5) 19-06-21

6 Reasons to add Imperial Helium to your portfolio

Best in class partners to mitigate risk and increase efficiency of shareholder capital.

Helium is a unique commodity, vital for the modern world.

Helium is an in-demand product that has limited global supply and availability (the end of U.S. Bureau of Land Management (BLM) sales has removed ~25% of global supply).

Imperial Helium has aligned with best in class alliance partners to capture the value chain.

Imperial Helium has set up its assets to monetize by partnering with commercial gas buyers ready to take it to market.

CNBC, Bloomberg and Yahoo are all saying that the helium shortage crisis is real and the way to benefit is with junior explorers such as Imperial Helium

Helium is a noble gas. It will not react or explode, making it highly valuable for creating pure, non-reactive environments for manufacturing and research. 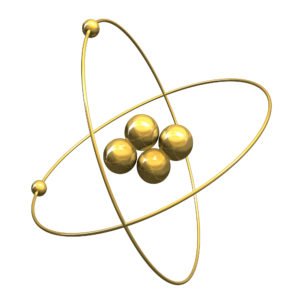 In many applications, helium is the best suited element for super-cooling, super-fluidity, and super-conductivity.

As the smallest of the noble gases, helium is widely used for leak detection.

Why Helium is Crucial in Our Everyday Lives 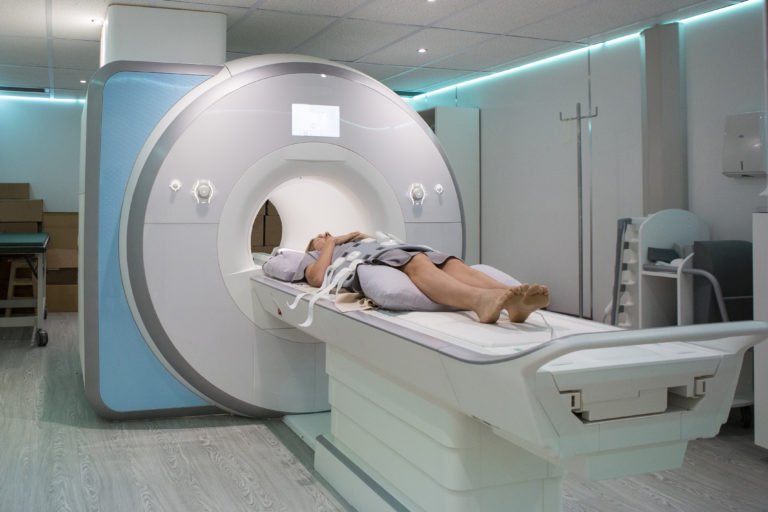 With the 2018 cessation of Helium sales by the U.S. BLM, the global helium market is expected to experience a prolonged deficit.

With the Helium shortage soon to be a big issue that the average person will know about… The smart play is to make a move into Imperial Helium (TSX-V: IHC – OTC: IMPHF) 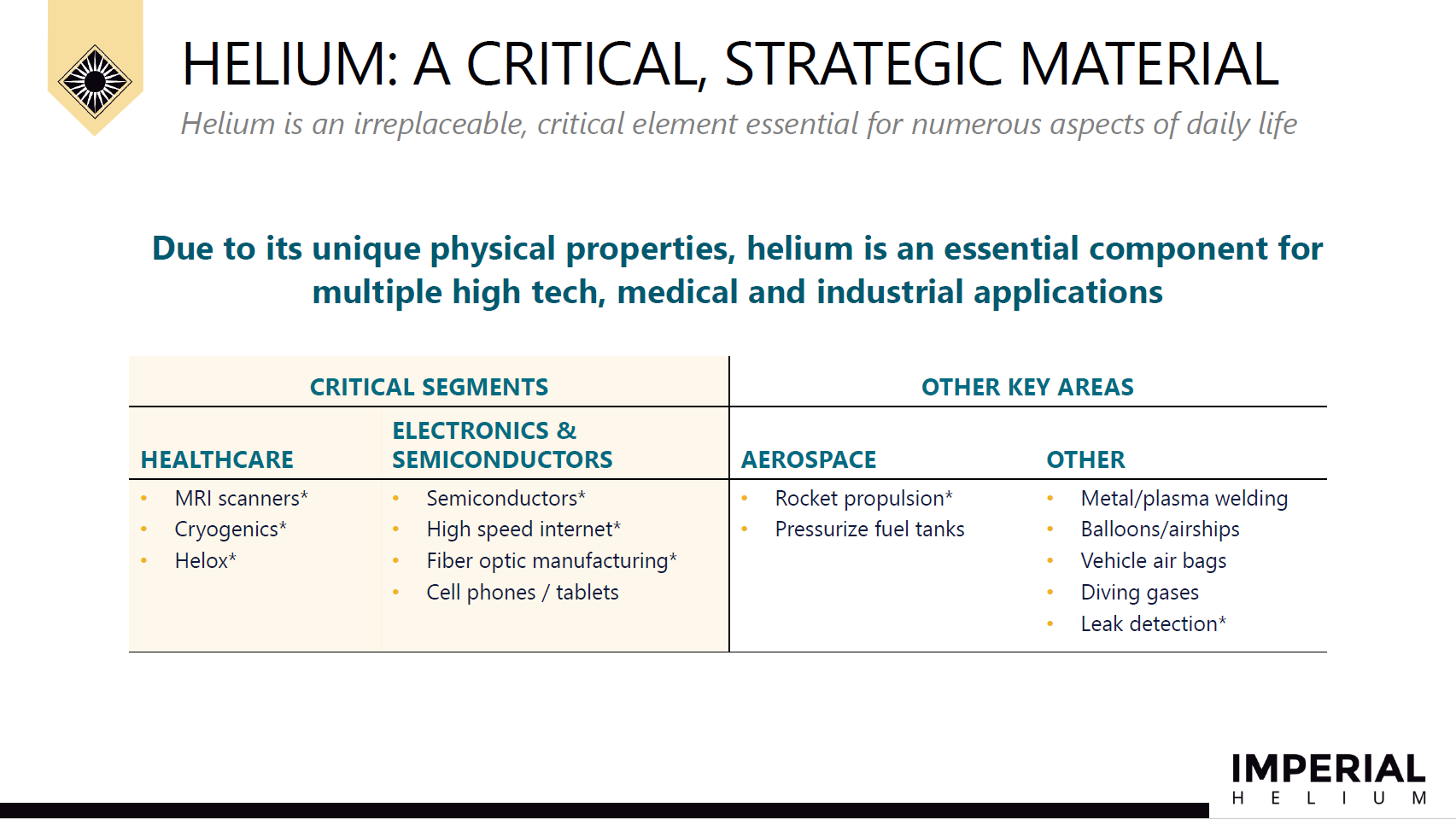 The Price of Helium

The price of helium has seen a rapid expansion in both spot public auctions and longer term negotiated private contracts.

This was caused by the reduction of BLM sales following the mandated sell down to strategic reserve levels.
Short supply and big demand = smart play 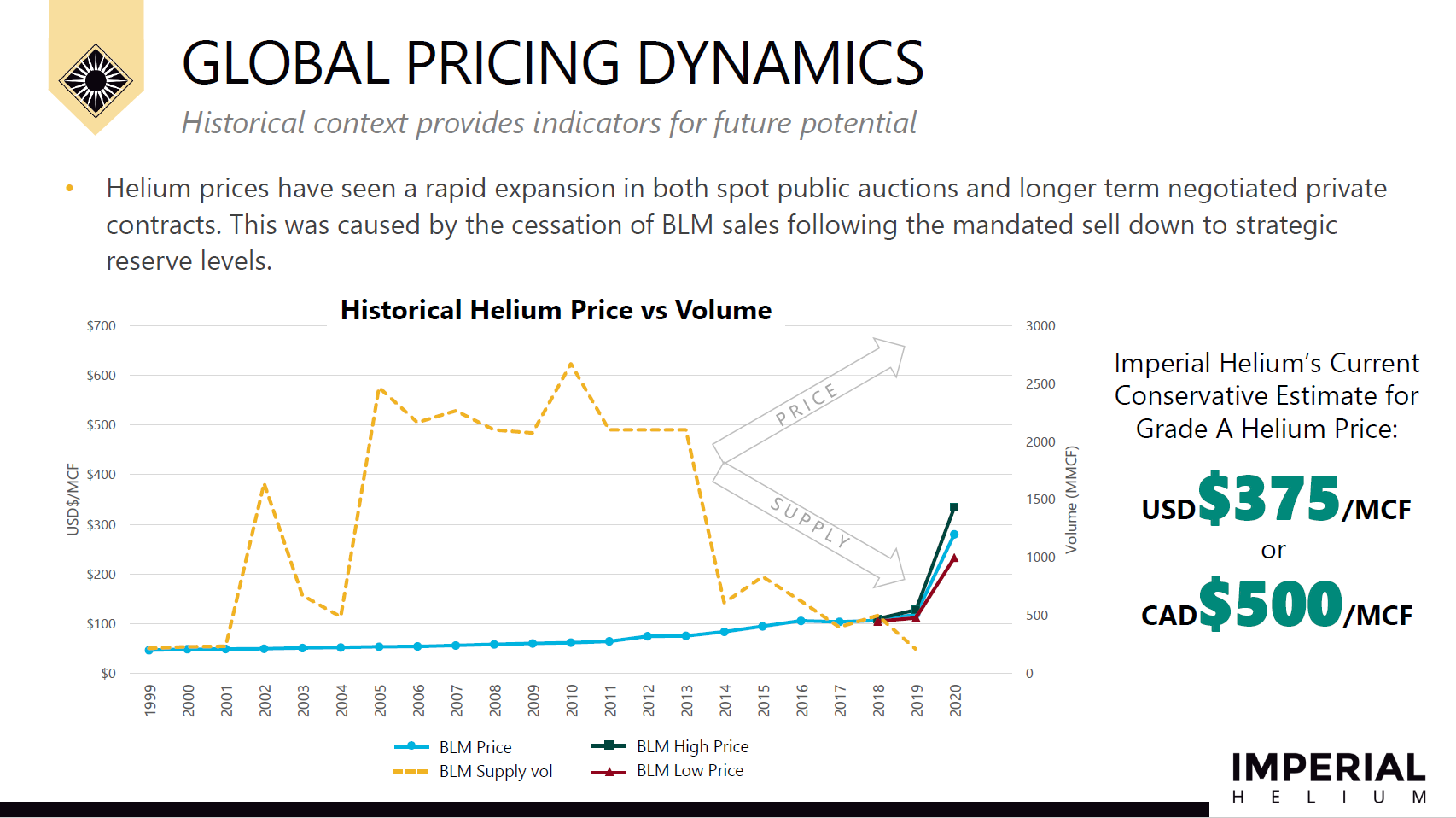 HC Steveville-1 is the first of two appraisal wells on the 1940’s historic discovery of the Steveville structure.

Steveville structure is confirmed by 3 other wells. None were production tested because the reservoir was already confirmed to contain 3.5% methane, 0.43% helium, 8% carbon-dioxide, and the balance being nitrogen.

Developing Helium Where it Has Already Been Found 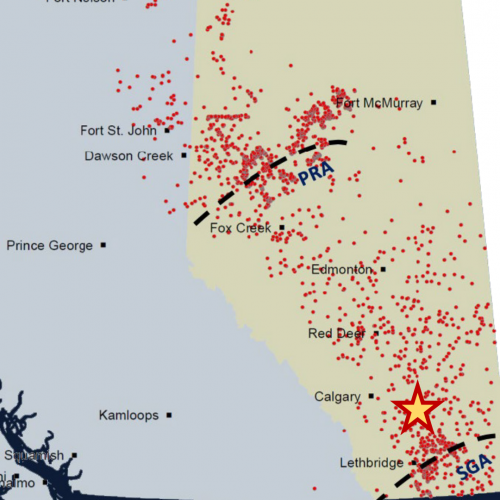 Imperial Helium (TSX-V: IHC) is led by a management team with over 80 years of combined experience in the Western Canadian energy industry. 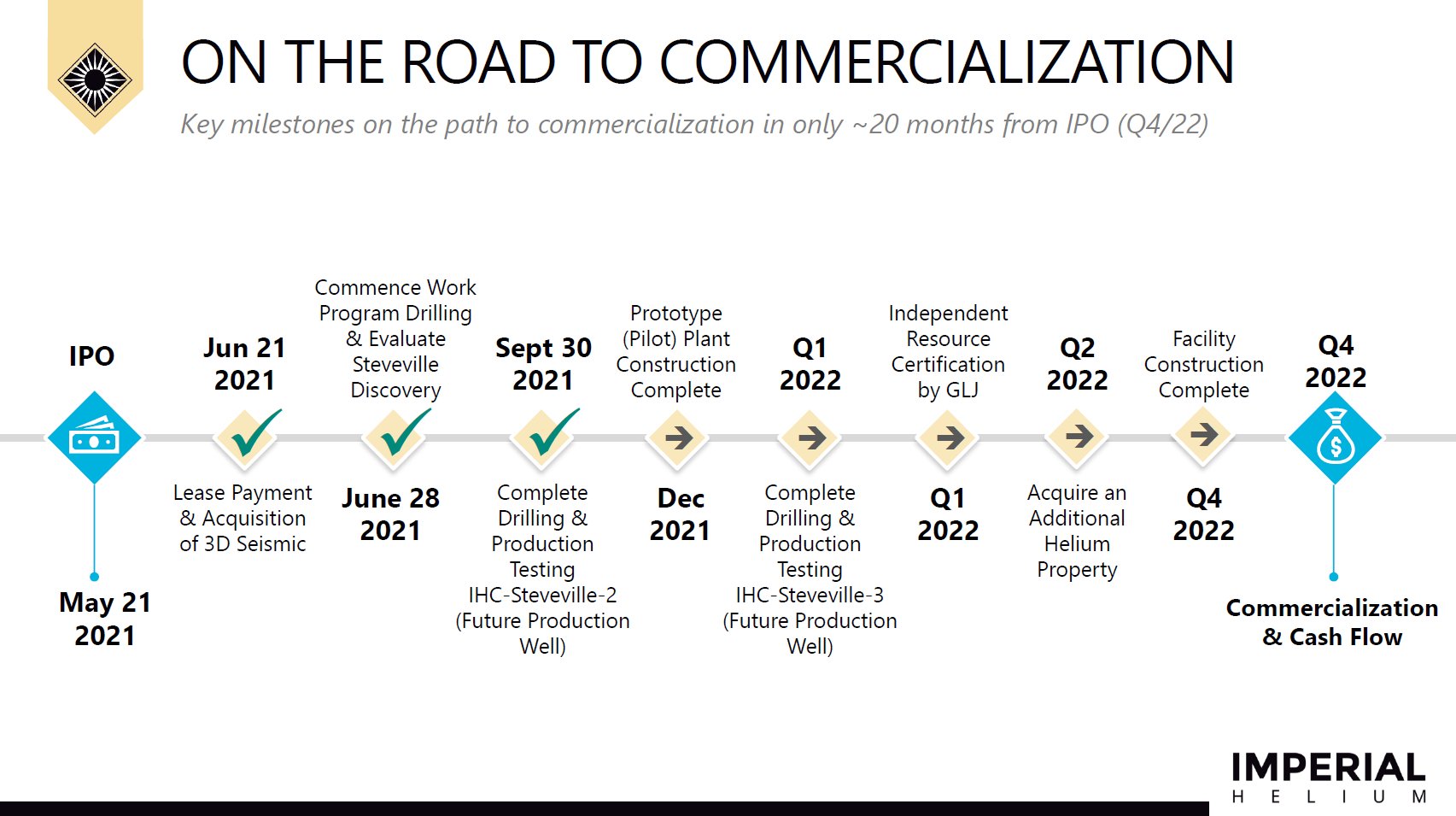 Sign up now to receive investor information about this irreplaceable commodity.

"Imperial Helium has a lower risk, two fold strategy. One part is exploration. The other is securing and re-drilling assets in areas of previous helium discoveries, starting with the Steveville in southern Alberta."

Imperial Helium is a publicly traded company on the TSXV under the ticker IHC.

Below is a view of our capital structure upon listing. Please note these are subject to change.

Dr. Johnson has more than 35 years of global, Canadian frontier, and Western Canadian exploration and production experience. He has previously worked for Shell Canada, ExxonMobil, Husky Energy, Kuwait Oil Company, KUFPEC, and a public international start-up, which he founded. Dr. Johnson has extensive business development, operations, geoscience research, and technical E&P experience covering 40+ petroleum provinces, with discoveries in Alberta, Saskatchewan, the Canadian Frontiers and the South China Sea. He currently serves as a Director for the Canadian Global Exploration Forum (CGEF), and a Councillor for the Association of Professional Engineers and Geoscientists of Alberta (APEGA).

Mr. Lappin brings over 20 years of experience in the Canadian and international oil and gas industry with both small private and large public companies including TechnipFMC and Aker Solutions. He spent 18 years with Deloitte in the audit, tax and consulting practices both in Canada and the UK. Through his career, Mr. Lappin has been an active volunteer within the oil and gas industry, including serving on the Board of the Canadian Heavy Oil Association for 8 years and serving as its President during 2010/11.

Prior to joining the Company, Mr. Lappin had been providing consulting services to Imperial Helium to assist in financing, which has afforded him insight and familiarization with IHC’s business strategy and projects. Mr. Lappin holds a Bachelor of Commerce degree from the University of Alberta and has been a member of the Chartered Professional Accountants of Alberta since 1984.

Mr. Zubkow has extensive experience in drilling and completing petroleum and natural gas wells, building production facilities and infrastructure, and managing production operations. As such, he is uniquely qualified with respect to the development of the helium resource in the Western Canadian Sedimentary Basin. He is currently a registered practicing engineer with the Association of Professional Engineers and Geoscientists of Alberta (APEGA).

Mr. Anfort is an explorer with more than 28 years of experience covering multiple basins in North America, Europe and Asia. The larger focus of his efforts include the Gulf of Mexico, Jeanne d’Arc and Flemish Pass Basins, further north into Labrador, the west coast of Greenland and up into the Canadian Arctic. He started his career at Marathon Oil in Houston, and has worked for Husky Energy, Statoil (Equinor), and Suncor in Calgary, Canada. Most recently he lived and worked in Budapest, Hungary for Sandhill Petroleum exploring the Eastern Pannonian Basin.

In each of these geologically diverse basins, Mr. Anfort has taken a regional approach to exploration, identifying plays and prospects by taking a hands-on integrated approach to evaluating geoscience data with a view to understanding petroleum systems and high-grading opportunities. He has been a leader on multiple successful exploration ventures most recently in the Mizzen and Bay du Nord discoveries of the Flemish Pass Basin. In addition, he was a principle in building the portfolio of prospects which included the recently announced discoveries of Cambriol and Capahayden by Equinor.

Mr. Anfort is currently a registered practicing Geoscientist with the Association of Professional Engineers and Geoscientists of Alberta (APEGA).

Significant contributor to the development of multiple successful plays in Western Canada, and seismic reservoir characterization of some of the world’s largest oil fields in Kuwait.

With the Helium shortage crisis soon to be known to the masses.

The smart play is to make a move into Imperial Helium (TSX-V: IHC – OTC: IMPHF)

There is urgent need to expand helium production within North America!

Imperial Helium (TSX-V: IHC - OTC: IMPHF) aims to deliver superior returns to our shareholders. You're invited to review our most recent presentation from November 2021.